The article series will include:

Who could be the readers of this article series?
This article series is for students or someone else who is the beginner of natural language processing or any other AI related areas, I hope you can find what you do want to know from my articles. Moreover, please be free to provide any comments or suggestions to improve the series.

The only thing you need to know is what is Named Entity Recognition. If you do not know neural networks, CRF or any other related knowledge, please DO NOT worry about that. I will explain everything as intuitive as possible.

If you do not know the details of BiLSTM and CRF, just remember they are two different layers in a named entity recognition model.

we assume that, we have a dataset in which we have two entity types, Person and Organization. Therefore, in fact, in our dataset, we have 5 entity labels:

I will give a brief introduction of this model.

As shown in the picture below: 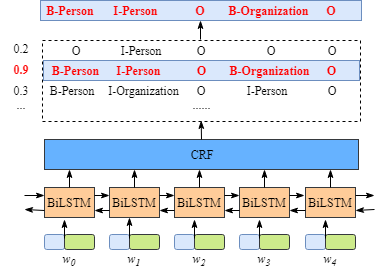 Although, it is not necessary to know the details of BiLSTM layer, in order to understand the CRF layer more easily, we have to know what is the meaning of the output of BiLSTM Layer. 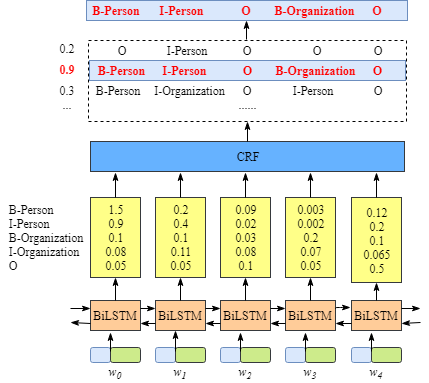 Then, all the scores predicted by the BiLSTM blocks are fed into the CRF layer. In the CRF layer, the label sequence which has the highest prediction score would be selected as the best answer.

1.3 What if we DO NOT have the CRF layer

You may have found that, even without the CRF Layer, in other words, we can train a BiLSTM named entity recognition model as shown in the following picture. 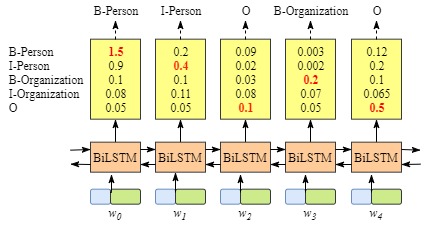 Because the outputs of BiLSTM of each word are the label scores. We can select the label which has the highest score for each word.

Although we can get correct labels for sentence $x$ in this example, but it is not always like that. Try again for the following example in the picture below. 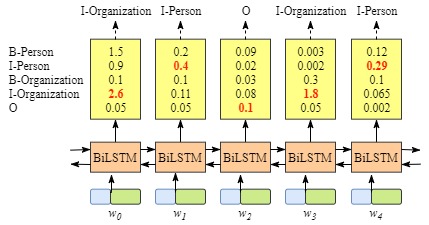 The constrains could be:

With these useful constrains, the number of invalid predicted label sequences will decrease dramatically.

In the next section, I will analyze the CRF loss function to explain how or why the CRF layer can learn those constrains mentioned above from training dataset.

Looking forward to seeing you soon!

Please note that: The Wechat Public Account is available now! If you found this article is useful and would like to found more information about this series, please be free to subscribe the public account by your Wechat! (2020-04-03)

When you reprint or distribute this article, please include the original link address.